Milan-Berlin Library District locations will be closed until further notice. All programs, services, and meeting room reservations have been cancelled. No items will be due during this time, and both bookdrops will be closed. For more information, click HERE. 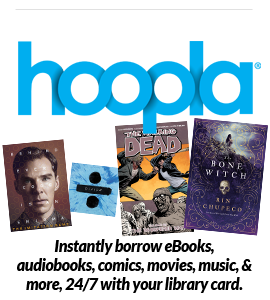 Our flagship book club meets on the third Wednesday of each month to discuss out latest selection. The group is open to all and covers books of every genre – both in fiction and nonfiction. Whether you’re a fan of suspense, historicals, biographies, or anything in between, you’ll find something to love about our adult book club.

Emma In the Night by Wendy Walker

One night, teenage sisters Cass and Emma disappear from their affluent, suburban home. Three years later, with just the clothes on her back and no evidence of where she’s been, Cass returns – without her sister. She talks of kidnapping and isolation, and a mysterious island where the two were held. But her story has holes – and it’s up to forensic psychologist Dr. Abby Winter to find the missing sister, Emma, and uncover what really happened in their tortured past. The truth will shock even Cass herself – a tale of fear, family and what it will take to survive her own past. 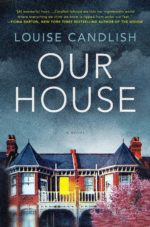 Our House by Louise Candlish

When Fiona Lawson arrives home to find strangers moving into her house, she is plunged into terror and confusion. She and her husband, Bram, have owned their home on Trinity Avenue for years; how can another family possibly think the house is theirs? And why has Bram disappeared–along with their two young children–when she needs him most?

As the nightmare takes hold, Fiona begins to untangle the lies that led to a devastating crime–and a betrayal so shocking it will teach her to keep her own secrets behind locked doors…. 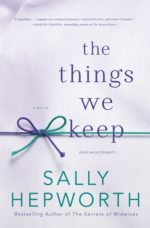 The Things We Keep by Sally Hepworth

Anna Forster is only thirty-eight years old, but her mind is slowly slipping away from her. Armed only with her keen wit and sharp-eyed determination, she knows that her family is doing what they believe to be best when they take her to Rosalind House, an assisted living facility. But Anna has a secret: she does not plan on staying. She also knows there’s just one another resident who is her age, Luke. What she does not expect is the love that blossoms between her and Luke even as she resists her new life. As her disease steals more and more of her memory, Anna fights to hold on to what she knows, including her relationship with Luke.

Eve Bennett, suddenly thrust into the role of single mother to her bright and vivacious seven-year-old daughter, finds herself putting her culinary training to use at Rosalind house. When she meets Anna and Luke, she is moved by the bond the pair has forged. But when a tragic incident leads Anna’s and Luke’s families to separate them, Eve finds herself questioning what she is willing to risk to help them. Eve has her own secrets, and her own desperate circumstances that raise the stakes even higher.

Milan-Berlin Library District locations will be closed until further notice. All programs, services, and meeting room reservations have been cancelled. No items will be due during this time, and both bookdrops will be closed. For more information, click HERE.